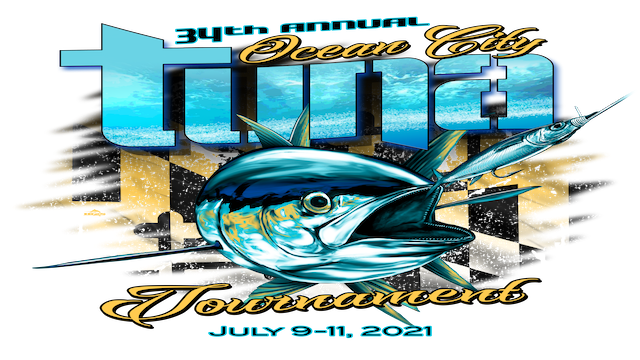 Check the vid for important information and virtual Captain’s Meeting for the 2021 Ocean City Tuna Tournament.

The 34th Annual Ocean City Tuna Tournament is not only a go this weekend, it is a record breaker.  I just got word that there will be 105 boats competing for over $1 Million in prize money!

The early weather forecast for this coming weekend had those of us in the OC fishing community nervous for what sort of turnout the Ocean City Tuna Tournament would see thanks to the probability that Tropical Storm Elsa would be moving through the area.  On Monday of this week the offshore forecast for Baltimore Canyon to Cape Charles Light was for winds of 35 to 45 knots on Friday with seas of 12 – 20 feet and winds of 25 – 35 knots on Saturday with seas of 7 – 12 feet.  Thankfully that forecast was updated and by Wednesday Tropical Storm Elsa was forecast to zip through the area and now the offshore forecast predicts high winds and rough seas on Friday, but winds of only 5 – 15 knots and seas of 3-5 feet for both Saturday and Sunday. I’m guessing that no one will be fishing Friday and if so this will become a fish two of two day event with all 105 boats fishing both Saturday and Sunday.  That should make for an exciting time at the Ocean City Fishing Center.  Scales action will take place Friday (probably not) and Saturday from 4 PM until 8:30 PM and Sunday from 4 PM until 7 PM.  If you can’t get to the scales at the Ocean City Fishing Center you can watch the live broadcast put on by myself and the Hooked on OC crew at www.OCTunaTournament.com

Congratulations to OCTT tournament directors and good luck to all 105 boats fishing this year’s 34th Annual Ocean City Tuna Tournament with a total purse of over $1 Million!!