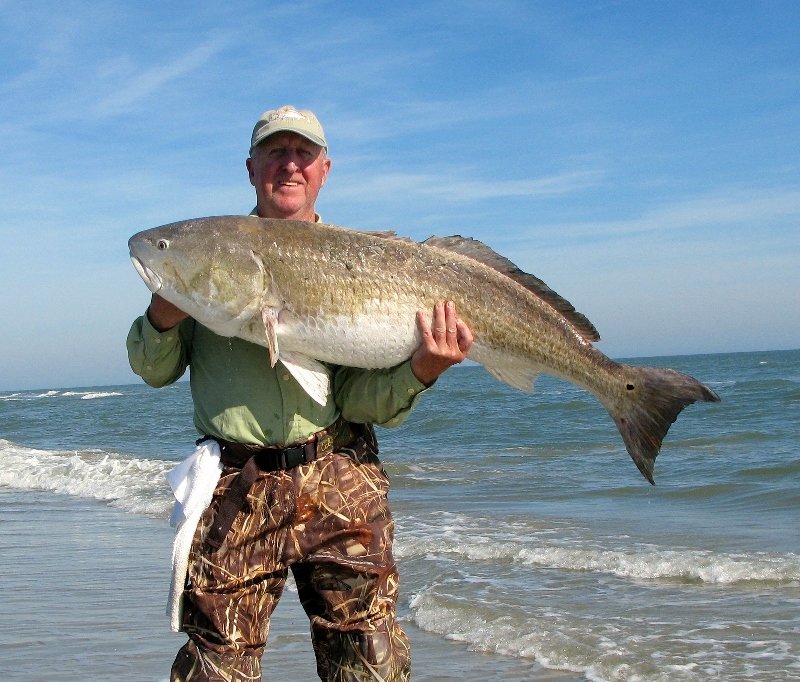 Surf fishing along the Delmarva coast generally begins in April, as migrating striped bass move out of the Chesapeake Bay and travel north to their summer grounds off New England. The spring striper run can last through May, with even a late straggler or two well into June.

Most surf anglers target the stripers with cut bait, especially menhaden (bunker), spot or mullet. The bunker is usually available fresh, while spot and mullet are mostly frozen this time of year. Other good baits include peeler crabs, clams and sand fleas.

For terminal tackle, most striper fishermen use a sliding sinker “fish finder” rig, although double hooked top and bottom (hi-lo) rigs also work well. The fish finder rig is generally tied with a short, four to six-inch leader in 80 to 130 lb. test and a hook in the 5/0 to 10/0 size range. Most anglers nowadays use circle or octopus circle hooks, especially if they are going to release their fish. The Mustad 39951BLN or 39954NP-BN and the Gamakatsu 208418(8/0) are some favorites, although quality hooks by other manufacturers such as Owner or Eagle Claw work just as well. A pyramid or “storm” sinker is necessary to hold bottom in the surf currents.

Striper fishermen usually cut the menhaden, spot or mullet into “chunks” and hook the bait once with the hook protruding. The heads of these baits are also used and are favored by many. Hook the head under the “chin” and out the top of the head in the tough area above the lips. The heads stay on well and resist crabs.

Big baits such as a bunker head, especially when fished with a five to eight ounce sinker, require a relatively heavy rod. Most are in 10 to 13 foot lengths and are rated for 3 to 8 ounces, 4 to 12 ounces or similar ranges. The reel, either spinning or conventional, should be capable of holding 275 to 300 yards of 20 lb. monofilament or 40 to 50 lb. test braided line. Anglers who prefer conventional tackle often fish a 20 lb. test monofilament main line with a 40 lb. test “shocker” that is long enough to make several wraps on the spool and keeps them from snapping the main line during the cast. Spinning rod anglers using 50 lb. braid usually don’t require the use of a shock leader.

Another favorite target species for spring surf anglers is the black drum. The blacks usually show up in April and will also stay through May. Most of the black drum are in the 10 to 20 lb. range, although some fish up to 40 or 50 lbs. are usually caught every year. Black drum feed primarily on crustaceans, so the favorite baits are peeler crabs, clams and sand fleas. Sand fleas (actually mole crabs) have become the favored bait for spring blacks, primarily because of availability. You can dig your own “fleas,” of course, and you’ll need a container with plenty of holes in both the sides and bottom to allow for air and most importantly, to let the crabs’ own urine to drain. If the waste isn’t drained, it will kill the crabs. You don’t need to put sand or water in the container. Just keep the crabs in a cool spot out of the sun and wind and they will live for quite a while.

The same terminal tackle used for stripers will take black drum. Many anglers nowadays put a two-inch strip of clam or crab flavored Fish Bites® artificial bait on the hook first, then follow with as many sand fleas as they can fit on the hook. Another reason for using a large, relatively thin wire hook. Leadered hooks with beads and spinner blades work well for the black drum. This same setup of Fish Bites® and sand fleas has also taken many stripers in the past few years.

Anglers targeting stripers usually look for a “hole” or a cut in the bar to set up. Black drum can also be caught in these areas, but don’t be afraid to fish up on the bar in the “white water” when targeting blacks, especially during high tides. Blacks can also be in very close to the shorebreak, just behind the dropoff at the edge of the beach.

The bluefish is another spring species along Delmarva beaches. They come a little later, usually around Mother’s Day, and nowadays they are not the guarantee they once were, but anglers fishing cut bait often find blues, especially in May. These blues can range from small “snappers” to big “slammers” in the 8 to 12 lb. range, though even the big fish are “all head” with thin bodies this time of year. The only real change in terminal tackle for targeting bluefish might be the use of “floater” hooks with brightly colored floats that keep the baits up off the bottom. Some anglers prefer them, and they are nice for keeping your bait away from skates and crabs.

By mid-June, when most of the stripers have gone north and the black drum have moved up to Delaware Bay to spawn, most surf anglers turn to lighter tackle and smaller fish. King whiting, known locally as “kingfish”, along with Norfolk spot and Atlantic croakers and occasionally a weakfish or “trout”, become the target species.

To fish for these smaller species, all you need is a 7 to 9 foot rod on a reel filled with 12 to 15 lb. test line. Top and bottom (hi-lo) rigs are preferred, with either plain hooks or hooks with small spinner blades or floats. The hooks are usually in the #1, 1/0 or 2/0 range, and can be either j-hooks or circle hooks. Some anglers prefer even smaller hooks, but I find that they are not necessary, and I like having a hook with enough strength in case I do hook something larger like a striper or puppy drum. In the summer months, sinkers can usually be downsized to 3-4 ounces.

For kingfish, as well as the other species, a small (1-inch) piece of bloodworm flavored Fish Bites® can be very effective. Other favored natural baits include real bloodworms, small pieces of peeler crab, sand fleas, squid, shrimp, and small strips of cut bait such as spot, mullet or bunker. Again, fish a “hole,” if you can find one, or a break in the bar where there is a rip current, but don’t be afraid to cast out to the sandbar, especially during high tide, when many species will forage for crabs, bean clams or sand fleas in the shallower areas.

In late summer, some surf anglers target the many species of sharks that move into the beaches, especially at night. A simple three-way swivel rig with a single 5/0 to 8/0 hook with wire leader will produce many of the smaller sharks like the sandbar, the smooth dogfish or even small hammerheads. Bait with a chunk of fresh or frozen spot, bluefish, bunker or even a large strip of squid or a squid head. Many shark species are protected, however, so make sure you can identify what you are legally allowed to keep. Better yet, just catch and release.

When September rolls around, serious surf fishermen start thinking red drum. Big reds move into the beaches in the fall to forage for crabs, spot, small bluefish and migrating mullet. The fall of 2014 produced some of the best red drum fishing in years on Assateague Island. The run started later than usual, in late September, but lasted longer, well into October, and many anglers recorded multiple catches of reds in the 40 to 50-inch range. What happens in a given year, however, is anyone’s guess, and a lot depends on the weather and the bait migrations. There were a lot of very small bluefish in the surf in 2014, for instance, and they stayed for weeks, giving the reds something to feed on.

Tackle and techniques for red drum are very similar to those used for stripers. A fish finder or double hook top and bottom rig will both take reds, though most anglers prefer the single hook fish finder. If you tie your own rigs, gold spinner blades with beads can be deadly. Cut bait such as spot, mullet, or bunker all produce. Fresh bait is preferred, but frozen will work. Spot or mullet heads are excellent red drum baits. I often keep one small-hook rig out baited with small strips of “meat” or FishBites® to catch kingfish or spot. A kingfish head is another good drum bait. If you can get peeler crabs, they are another effective red drum bait, as are sand fleas (three or four on the same hook). Cut the peeler in half or quarters, depending on the size of the crab, put the hook through the body at the joint of a leg, then rotate the legs up around the hook shank and secure with a rubber band. This bait will also catch the occasional black drum that moves back into the beach in the fall. Remember, all reds over 27 inches (26 in Virginia) must be released.

In addition to the red drum, the fall surf can produce bluefish, black drum, weakfish, speckled trout, flounder and kingfish. Late fall (November) into December and even January can produce another striper run, depending on water temps and where the bait is. The past few years have been disappointing for fall striper fishermen on the beach, however, as we have had a lot of northwest winds, which push the warmer water offshore. The bait follows the warmer water and the stripers stay with the food, but every year is different.

Fall is also the best time if you want to throw artificial lures on the beach. Stripers, flounder, bluefish, puppy drum and speckled trout can all be caught at times by anglers using a variety of lures such as Mirr-O-lures, wooden darters or lipped plugs, Rebel lures, or simple jig heads with plastic curl tails. Fishing around the stone jetties or where there is a break causing a rip current can be productive. High outgoing tide often seems to produce best. A 7 to 8 foot rod with 12 lb. mono or 15 lb. braid can give you the best distance with a light lure.

See you on the beach….