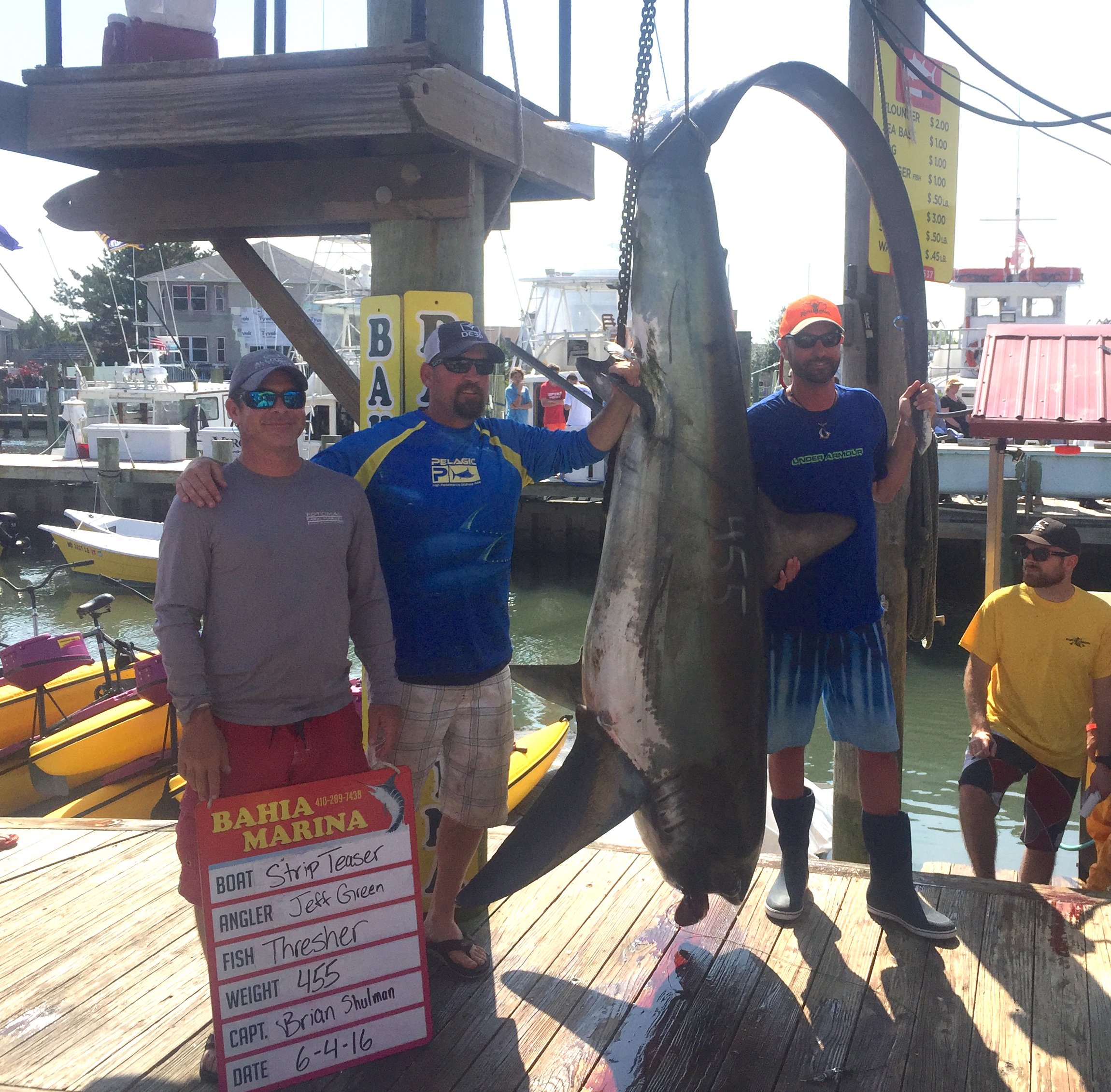 It was another great Saturday of fishing inshore and offshore today, but before I get to that I need to mention a milestone for the Morning Star, the Ocean City Reef Foundation and the Ocean City bottom fishing community in general.  Yesterday Captain Monty Hawkins and the crew of the Morning Star dropped Ocean City Reef Foundation block #13,000 on Doug Ake’s reef.  Wes Pollitt had the honor of dropping the block on Monty’s call of “mark” and for the 13,000th time build on bottom structure off of the coast of Ocean City.  Congratulations guys….and thanks!! Two days of fishing are in the books for the 20th Annual Mako Mania and this is how the leader board looks with one day left to go. 1st place is still held by the Talk N’ Trash who weighed a 12.2 pounder yesterday. 3rd place thresher is held by the crew of the Teaser who caught a 318.7 pound fish yesterday. 2nd place thresher was weighed yesterday by Mike Moss on the Captain Ike II and weighed in at 407.8 pounds. 1st place in the thresher category hit the dock at Bahia Marina today at about 4:15 and was so big that it had to be dropped in the water and brought up through the boat ramp.  Jeff Green and the crew of the Stripteaser landed a 455 pound thresher and now hold first place and are currently looking at over $9,000. 3rd place in the mako category is held by the crew of the Reel Nauti who caught a 182.5 pound mako yesterday. 1st place in the mako category is still held by the crew of the Jade II with Captain Ed Kauffman.  If the Jade II’s fish hold on through tomorrow they are looking at over $50,000. Outside of the tournament the tuna fishing in the offshore canyons continues to be stellar.

The crew of the Boss Hogg fishing out of Sunset Marina today had eight nice keeper yellowfin and a nice gaffer mahi. Austin Ensor and his crew of Corey Jubb, Chris Hubbard and Brandon Records went five for seven bites on yellowfin tuna in the Washington Canyon on trolled ballyhoo on Austin’s boat Primary Search.  These were the first tuna ever for Brandon and Chris. Austin also sent me a nice pic of Tom Over and the crew of the Overbillin’ who caught three nice yellowfin and a gaffer mahi. On the inshore tip, Wes Pollitt from the Morning Star with Captain Monty Hawkins reported that the flounder fishing is picking up.  The Morning Star had a good day with the flatties capturing seven nice keepers. Captain Chris Mizurak on the Angler reports a slower pick of sea bass for today, but some nice fish were in the mix up to four pounds. Captain John Prather on Ocean City Guide Service reported some good flounder fishing from the bay today.  Captain John put Tim on a limit of flounder behind Assateague Island on minnows during the outgoing tide. The report is coming out late this evening because we had the pleasure of fishing the Oceanic Pier for our next episode of Hooked on OC.  We got there just in time for a great sunset and just in time for the bluefish action to start. Chris Shamblin hooked us up with the proper technique and his corner spot and Dorian Messick and our new friend Justin were able to catch a couple of nice snapper bluefish.  There were several other bluefish and at least one shad caught while we were filming and everyone had a good time.  It was nice to meet some new friends and some new fans of the show.