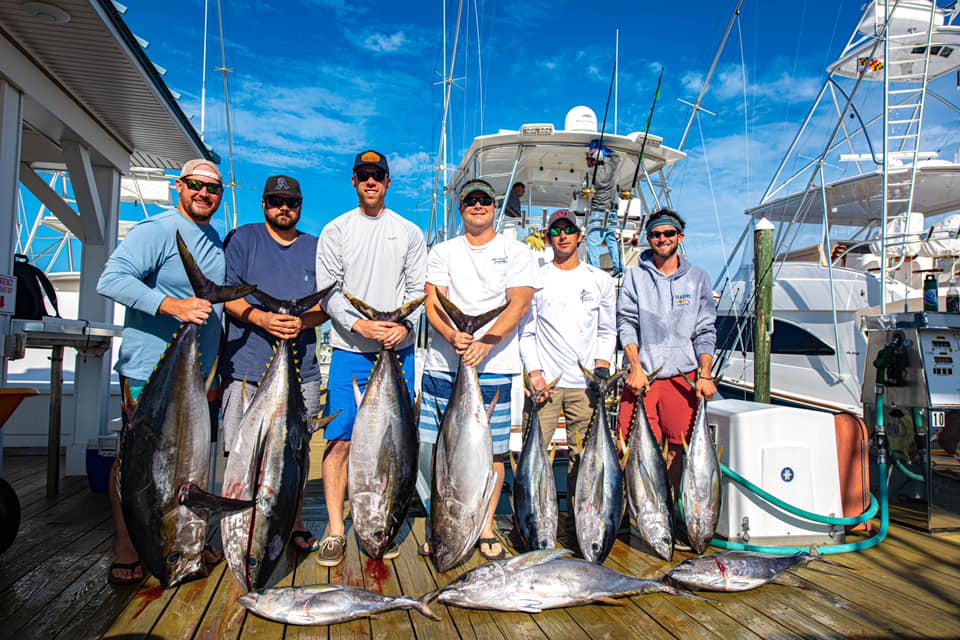 The Ocean City Tuna Tournament is ON!!  Check out the details above with Rolfe Gudelsky and Brian Tinkler.

The Judith M out of Bahia Marina is looking for a Captain to run 1/2 day trips up to 7 days a week.  Must have 50 Ton Master or better license.  Email fish@judithmfishingoc.com if interested.

It was a windy one today son…most of the ocean going party boats were tied to the dock and folks that fished the bay dealt with white caps and fast drifts for most of the day.  The sun was shining and the fish have been biting so it was a good day for many anglers.

It was another busy day over at Sunset Marina today as the offshore fleet whooped up on some tunas again.  Captain Anthony Matarese Jr. and the crew of Reel Chaos had another tremendous day today putting several yellowfin tuna in the box along with some nice bigeyes.  Photo by Sunset Marina. Captain Andrew Dotterweich of Fish On had another stellar day today too with a bunch of yellowfin tuna bites.  Captain Andrew put his crew on 13 fish with a couple that lost their tails to hungry mako sharks.  Photo by Sunset Marina. Captain Mark Hoos of the Marli had some fish short bite and others pull hooks, but his crew still put eight healthy yellowfin tuna in the box.  Photo by Sunset Marina. Captain Joe Drosey reported that it wasn’t as red hot as it was yesterday, but it was still reel good with some quality yellowfin tuna ending up on the deck. Captain Chris Watkowski and Mate Ayrton Pryor of Spring Mix II had a nice day trolling outside of the Rockpile today and put five yellowfin tuna in the fish box for their anglers. There’s no doubt that flounder fishing in the back bays has been tough in this wind, but Captain John Prather of Ocean City Guide Service has got a knack for it.  Today Captain John put his anglers, including Brock and Brody on some keeper flounder action. Andrew Bugg, Courty Reges & Mike Runkles found three keeper flounder while fishing behind Assateague Island on the incoming tide today.  The group used the Fish in OC Deadly Double in pink with pink Gulp and minnows to land fish up to 20″.