I just got off the phone with Delegate Wayne Hartman who confirmed that during a joint session Mayor Rick Mehan issued an emergency declaration to reopen the Ocean City beach, beach access points, the inlet parking lot and the boardwalk to all starting this Saturday, May 9th.  Limitations and restrictions will apply and there will be more details to come in the coming days.  Here is the official announcement from our friends at the Dispatch.

A new emergency declaration by Mayor Rick Meehan sets Saturday, May 9 as the re-opening date for the beach, beach access points, Boardwalk and Inlet parking lot. The decision was made after tonight’s Mayor and Council meeting, which was conducted on Zoom and not announced during the public session. Full details tomorrow online.

Now you’re probably not going to catch these kind of fish on the beach in Ocean City, but it sure will be nice to get out there and try.  Tyler Tribbitt was fishing a Virginia barrier island just to the south of Assateague when he caught and released these jumbo red drum.  The fish were 48″ and 49″ and swam away unharmed. 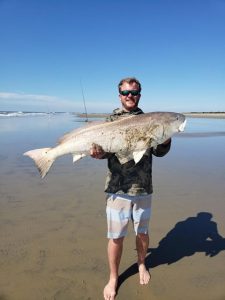 Levi Dunlap and crew had a crazy good weekend of flounder fishing in the Thorofare using our Deadly Double rigs.  The crew had three keeper flounder on Friday and five keepers on Saturday using the Deadly Double in both chartreuse and pink.  When I asked how many of the fish were caught on the Deadly Double he said, “every single fish brother!” Cham Som was fishing with his buddy Nathan P. when Nathan caught this 18.5″ keeper flounder on the Deadly Double in chartreuse. The Deadly Doubles are working for me and for other anglers, get yours at local tackle shops or online at FishinOC.com/shop

The cutest fishing report of the century came in from Shannon Smith who was fishing with Rennie Hunt and their daughter Harper who is just 22 months old.  Harper caught these two keeper flounder on her Barbie rod….nuff said!