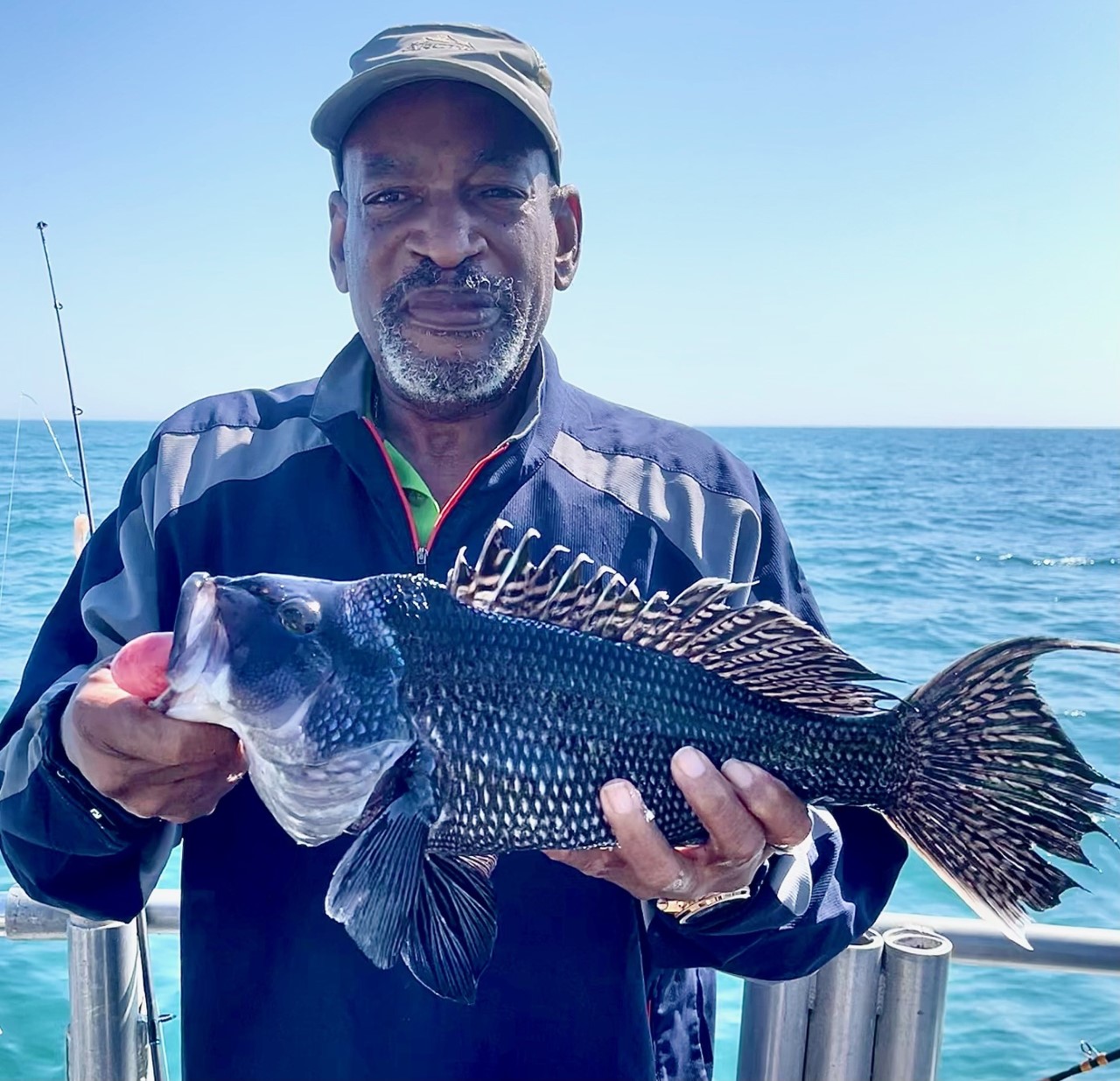 Check out the Angler’s Advantage at Atlantic Tackle!

Yep!  Another beautiful day in and around Ocean City.  We could definitely get used to this!  Light winds, warms temps and sunny skies all day long!  Through in some good fishing and it was an awesome day.

The ocean going party boat fleet enjoyed another great weather day today, and the fishing was good too with plenty of real pretty sea bass coming aboard.  Captain Monty Hawkins of the Morning Star saw an exceptionally good class of fish today.

Ahhhh.. A normal day at sea. No barges to sink. No alarms set unpleasantly early. No fog. No t-storms or heavy seas. Just some nice folks, even a few regulars, looking to catch a sea bass on a beautiful calm day.

They did too. No limits but derned if there weren’t some pretty sea bass.

Susan & George pushed our reef blocks over at a new spot today. First block drop of what will become many; perhaps I’ll call it ‘the gap.’

When we dropped the barge yesterday–sunk the 110ft ex-Navy barge, I was trying to get very close to another reef; had intentions of joining them with reef blocks. Not much more than 20 feet between the two pieces, we’ll fill the gap handily and then work on the protected/sheltered area – protected from E & NE current and swells immediately west of Tyler Long’s Reef. It will, one day, be a model reef.

Trying out his sun-shield get up for a 4 day summer trip with Capt. Greg on the Yankee Capts down in Key West, Hank took everyone’s pool money with a knot-headed sea bass. If we had a pool for heaviest/longest conger eel of the year he’d have a great shot at that too. Dagone sea serpent..

No one boxed out. Best size so far though. Lot of what we call jumbos in this era.

The MOST and LARGEST sea bass we ever had since the 1970s off Ocean City was in the seventh year of management – 2003. All those jumbo fish back then were spawned (and had spawned themselves!) when there were no closed seasons, a small size limit of 9/10/11 inches and No Bag Limit.

Did 2 years of work from 2003 on trying to figure it out. I’ve tried since 2006 to convince Science & Management to have a look at my argument for why sea bass populations declined once the size limit hit 12 inches even though there was a bag limit. Closures don’t help either.

No luck yet but maybe soon. I will keep trying. They were and remain the simplest fish to manage – but then recreational catch estimates got in the way.

Cbass were feeding on krill today. First we’ve seen it this season. Most years bellies full of krill would be ‘normal’ by now. I think the nor’easter just before sea bass opened held everything up – including the krill.

I couldn’t ID this species of tiny shrimp. The 5/8s of an inch critters weren’t in Gosner’s Atlantic Seashore Guide that I saw. Carry a small field scope and giant magnifying glass; had Vic take some pics through those lenses. Someone will know. They were plenty thick. Lots of (all of?) our sea bass today had them. Maybe the google will know on the way home.. (no time..)

There was a paper, now used by fishery management, that showed rock crab (white leggers to tog enthusiasts) as the predominant food of our region’s sea bass.

A college youngster looked at sea bass for a few weeks as his masters thesis; wrote a paper for a professor who may or may not have spent more time with sea bass. In the federal work on sea bass stomach content analysis they describe ‘a grey mass of digested material’. I don’t recall it in this recent work.

If you examine cbass early in the morning and they’re feeding on krill, a digested/digesting mass is what you’ll find. Those itty bitty shrimp are processed quick.

After cbass have begun feeding again in the morning you’ll find the behavior matches the diet. Moser/Shepherd’s second sea bass tagging study with archival tags found sea bass rose 15 to 30 feet off the bottom every day, even 45 ft – except a few days. I promise, on those exceptions there was either heavy weather, shark/other predators about, or they were feeding on abundant squid/sand lance/jv butterfish using ‘hidden in the reef’ ambush behavior.

If not feeding from ambush positions, krill are what drive the bus. They just chill above the reef and catch what comes by. That’s what sea bass survive on. But the study now guiding our region’s science and management? It shows sea bass are utterly reliant on rock crabs.

Yes, they will eat a crab. Even a bunch of them if small. But here the evidence, the crab, does not become unidentifiable mush overnight; no, a crab might take weeks to digest. Crab are what a student would find. When a sea bass eats a crab it’s there for a long time.

Unless it’s a softshell. Sea bass like them plenty well too and  I’d suspect they digest more quickly.

Different kind of crab but so do I. You know, like softshells. I’m late but they’re still shedding. Can’t wait!

What a gorgeous vista today.. Captain Chris Mizurak of the Angler reported calm seas again today and a good bite with sea bass.  They even had a couple of flounder duke it out for the fish pool. Captain Victor Bunting saw some nice fishing on board the Ocean Princess today with sea bass ending up in coolers for most on board. Big Bird Cropper and Luke had a nice day of Roy Rigging today where they released a bunch of short rockfish and Luke caught his first bluefish at 30″. I fished the Thorofare today with my brother Jimmy in some not so clean water, but the Deadly Double in chartreuse found a 17.5″ keeper.

Hit the vid for our YouTube Back Deck Fishing Report