Captain Monty didn’t have the best day of fishing ever, but the wind wasn’t blowing and some fish came over the rail.  So you take the good with the bad.  Great American Outdoor Show in Harrisburg, PA starts Saturday morning!

Did have a perfect block drop and accompanying reef pyramid drop. Folks have been fishing that spot a while. We’ll make it bigger.

What will it be like, I wonder, when all the folks who saw/lived through the tire fiasco—who were taught and who saw how ‘bad’ artificial reefs are as bundled tires broke apart and washed up on beaches from NY to TX and have been at the top of NOAA for decades—what will it be like when those who have instead seen millions of tons of corals growing on artificial substrates, who’ve witnessed the importance of reef building to some waterfront’s economic resurgence; what will it be like when NOAA itself puts a shoulder into re-reefing the sea bed?

Although I see bargeloads of enormous granite boulders and fisheries flourishing again where they’ve been missing 60 and more years; it’ll be a while I reckon. Best plan on some more raffles and spaghetti dinners for the OC Reef Foundation.

We ain’t big, but we are building reef.

Long time regular, Chuck B had todays pool fish. If he’d have caught the one he lost he’d have been high hook too.

Brutally slow today. Caught 3 fish. Frank’s was small, he tagged it. Tagged: he even posed with it.

Another tag was almost 19 inches. The angler would have surely held up this decent fish for all to witness, but no, my mate failed to take a snap of it.

Anchoring was outside the red “extremely difficult” zone from day’s begining to end.

(PS We may have the only successful tire reef from that mosquito control project of the 1970s. It’s about 9 miles out and protected by the ‘First Lump’, a shoal that rises 50 feet off the seafloor…)

All 4 sunrise pics are from this morning. 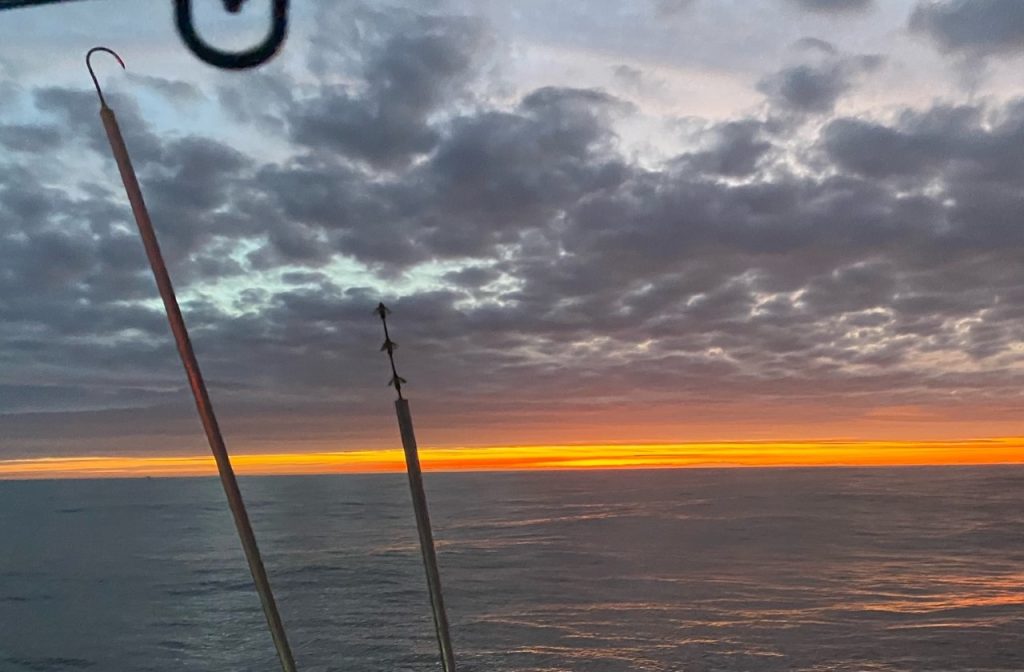