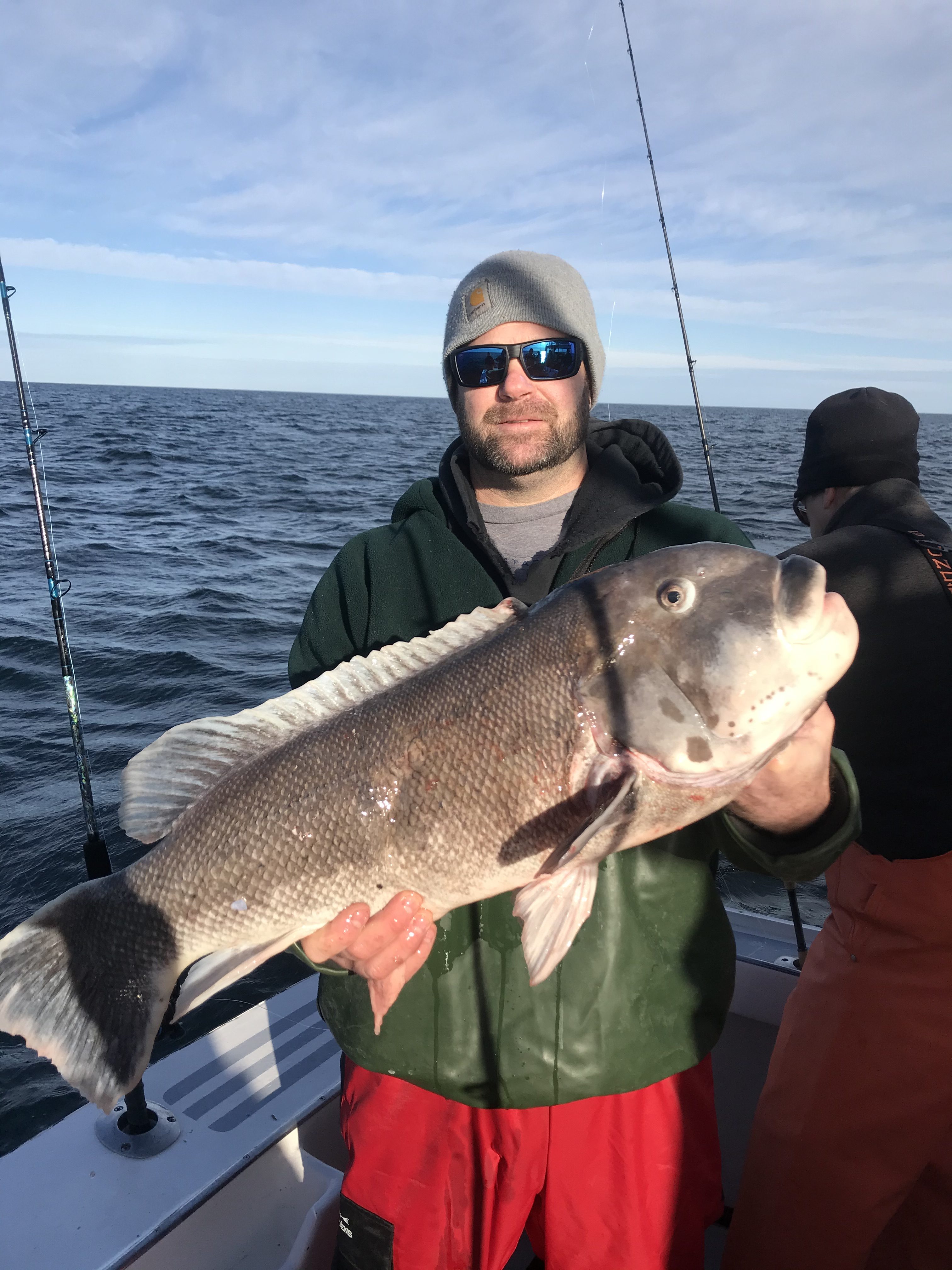 Today started off absolutely beautiful on the water.  There was definitely a nip in the air, but the ocean was flat calm and we were greeted by a gorgeous sunrise.  The weather has turned to crap now with a cold rain and a gusty wind and tomorrow looks to blow a gale.  It was a great day to get out on the ocean to make a new episode of Hooked on OC and do some tog taggin’!

I got to see the beautiful weather and sunrise first hand this morning as I headed out on the Morning Star with Captain Monty Hawkins for a new episode of Hooked on OC.  This was a mainly scientific trip with lots of tagging and releasing with just a few fish going in the box.  I got nicknamed “Sea Bass Scotty” today because I did not catch a tautog, but nobody could touch my sea bass skills as I released 6 jumbos up to 19″.  Closed season on them means it was Crabs to Go for dinner.

Ocean slick as glass come dawn and a sunrise worth noting; took a few regulars & reef supporters out for some science today. Also had Hooked on OC’s Scott Lenox, & MD DNR’s lead tautog biologist, Craig Weedon, aboard for tagging/aging work. Dropped a 28 block reef unit & a pyramid and pressed on. Wasn’t the day I’d hoped for, but certainly a step forward. We tagged 34 & had 4 recaptures (previously tagged tog) that were re-released w/tag intact. Many clients kept dinner too.
Craig (Colonel Weedon!) gave me DNR’s tautog aging chart from the last few years of work today.
Our typical ‘keeper’ of 16 to 18 inches is 6 to 8 years old. It’s not a smooth curve. Many 18 inchers were 6 yo, & some even 5. One 18 inch tog was only 4 yo, while another was 11 yo.
The smallest ones they’d sampled were 10 inches. Ten & 11 inch tog were already 2/3/4 years old.
On the jumbo side Capt. Kane/Ken Westerfeld’s world record tog was 35 inches & 23 yo.
A typical pool winner of yesteryear, say 26 inches, might be 15 to 27 yo with what seems a 22 yo average.
You know, I think we’d better reexamine our tog regulations, especially given today’s popularity….
Back to today’s trip. The strangest thing happened – our biologist won the pool! Craig’s fish was a 24.5 inch female (so perhaps 12/16 years old.)
Phil Young from Berlin MD shows off a 23.5 in male.
Joe Mole’ tagged this male and many others.
Also in the group snap are
Bill DaCosta of Long Island and Rusty Daub of Berlin MD.